After hours of searching Google, lots of trial and error, and a bunch of grumbling, I had a breakthrough and finally figured out how to get Source Maps to work under Chrome and Compass. The problem is that this functionality has been around for over a year in various forms in the pre-release versions of Sass and Chrome. As such, many of the posts I found were out dated and didn't work with the current, stable versions. So this post is partially to document the process for myself (and a small victory lap!), but hopefully someone else will get something out of it. 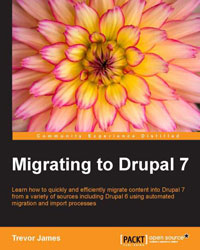 There is a lot about Drupal that is pretty awesome, upgrades and content migration don't top the list however. Trevor James's new book, Migrating to Drupal 7, is published by Packt and takes a look at a couple ways of getting existing content into Drupal. The two most common ways are the Feeds module and the Migrate module, both are touched on. Additionally the Drupal 6 to Drupal 7 upgrade preocess is covered, as well as importing content into Drupal from Wordpress. 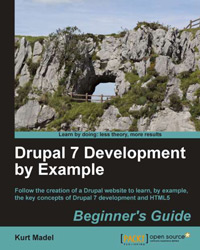 Typically I find that learning by doing works best for me, and there are some subjects (Drupal) that lend themselves to this approach as well. Drupal 7 Development by Example sounded like just the ticket. Many of the big keywords are hit on while flipping through the preface. Initially this sounds great, but perhaps there are too many? This book appears to have all the right intentions, but maybe it bites off a bit too much? 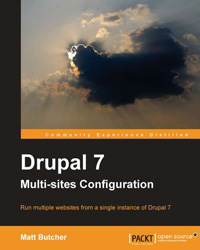 Running multiple sites on a single codebase is only one of Drupal's tricks, and it is a cool one! Packt's new mini book digs into the multi-site topics and provides a wealth of info for all levels of site builders. 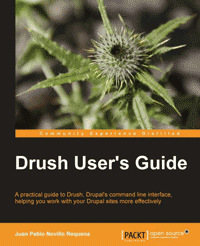 Drush is the indispensable Swiss Army Knife of the Drupal command line warrior. However Drush isn't just for those that live in a terminal, it offers lots of valuable time savers that any level of Drupal site builder can leverage. Packt's Drush User's Guide details installation, and novice to advanced level documentation that can benefit all Drush users.

The Monkey was very happy to see that Dani Nordin didn't waste anytime jumping straight into the content with her designer oriented book. Admittedly at 170 pages, there isn't room for fluff! However she does manage to pack in some good stuff that should appeal to those that are more oriented towards the front end and visual side of Drupal. Drupal is complex enough that there are several processes a good project should go through before code or pixels are laid down.